This month, new research revealed a scientific discovery -- a specific type of bacteria that can live in your gut competes with your body for an important nutrient called queuine (KYOO-in).

Normally bacteria make their own queuine. Humans harvest this essential nutrient through the gut, by way of salvage enzymes that source it either from food or from gut bacteria that manufacture it.

What scientists at the University of Florida recently discovered is "that some bacteria that live in the human environment are not making (queuine) from scratch; instead, they're competing for the same micronutrients as the human host."

This discovery is significant because queuine is such an important nutrient for longevity and health.

Ames’ research has observed that proteins and enzymes fall into two classes - survival and longevity protein. The divide between categories depends on whether the proteins or enzymes are essential for survival and/or reproduction (immediate need) or by the way they contribute to long-term health (longevity).

Nutrients that support the function of these proteins and enzymes are classified in the same manner.

According to Dr. Ames, “Impairment of the function of longevity proteins results in an insidious acceleration of the risk of diseases associated with aging.”

Thus, anything depleting the body of this nutrient is effectively decreasing your long-term health.

Ames firmly believes the effects of not having enough longevity vitamins such as queuine “result in damage that is cumulative and insidious.”

Another aspect of that new research at the University of Florida’s Department of Microbiology and Cell Science is the type of bacteria they realize is scavenging queuine from human hosts -- C. difficile.

Clostridioides difficile, sometimes known as C. difficile or C. diff, is a problematic and opportunistic bacteria that causes diarrhea and other intestinal issues. When it’s allowed to flourish, C. diff can cause a serious and often life-threatening infection of the gut.

According to the CDC (Centers for Disease Control and Prevention), most incidences of C. diff infection occur during antibiotic treatment, or soon after. And, even though it’s well-known that antibiotics can create this infection, C. difficile can lay dormant, finding later opportunities to overgrown and create chronic, sometimes fatal, intestinal infection.

Once C. difficile has established itself in your gut, it can create toxins that attack the lining of your intestines. These toxins then do more damage. They destroy cells, create patches of inflammatory cells and decaying cellular debris inside your colon, and cause watery diarrhea.

Normally experts expect to see older people, those in nursing homes and people who have been on antibiotics to be at risk for C. difficile. Unfortunately, according to the Mayo Clinic, rates of young and healthy people are on the rise. In 2015, the CDC reported that C. diff had caused 500,000 infections and 15,000 deaths in a single year.

Between depleting your body of queuine and having the potential of terrible infection, C. diff. is most definitely not a gut bug you want to allow to become overgrown due to an imbalanced microbiome.

The Battle of the Gut Bugs

C. difficile is not the only bacteria or microbe to competition for nutrients or create problems.

First of all, your gut microbes are constantly in competition for nutrients and space to live inside their host—you. In fact, competing bacteria can even secrete toxins in an attempt to kill off other strains. Toxins that your body then has to deal with.

Co-evolving and competing strains of bacteria can lead to biofilms developing, which hamper the treatment of bacterial infection and may even result in antibiotic resistance. Some are known to present an increase in both arterial plaque build-up (atherosclerosis) and major cardiovascular events.

In the words of Federico Rey, professor of bacteriology at the University of Wisconsin-Madison, "Gut bacteria get to use a lot of our food before we do.”

In the summer of 2017, Rey’s UW-Madison team, in conjunction with Harvard, published new research on gut bacteria that consume another essential nutrient called choline.

Using mice, these scientists determined that guts with a high presence of choline-hungry microbes had a deficiency in this essential nutrient that in turn created an increased susceptibility to metabolic diseases.

In addition, the mice with microbe-induced choline deficiencies gave birth to pups with “biochemical alterations in the brain and that exhibited more anxious behaviors.”

Yet, choline is easy to get from diet. High amounts are found in eggs, soybeans, fish, meat, milk, cauliflower, and other foods. Despite this, it’s estimated that only 10% of Americans get the recommended daily amount of choline.

Could it be that imbalances in gut bacteria are contributing to these deficiencies? Which in turn lead to more metabolic problems that can create a health spiral? At this time there may not be a clear answer on that, but it does create logical speculation.

Further speculation arises when you consider other observations by the UW-Madison team. When they fed the choline-deficient mice high-fat diets, these mice added notably more abdominal fat and had fattier livers. Both are signs of insulin resistance and potential autoimmune issues.

Another factor this research highlighted concerns the negative effects that can occur due to the byproducts of gut bacteria. In this case, the bacteria consuming the choline create a toxic byproduct called TMAO, which is linked to negative health outcomes.

In fact, high TMAO levels have been connected to a 23% higher risk of cardiovascular events and a 55% higher risk of mortality. Researchers reported much higher levels of TMAO in the mice with overgrowths of choline-eating bacteria.

The delicate balance of the gut becomes clearer as we consider this research. In the case of choline, simply upping your intake may actually create more problems if you have an overgrowth of the gut bacteria that eat this nutrient. You inadvertently create more damaging TMAO.

Unfortunately, research on precisely how gut bacteria imbalances affect your body is just beginning. Which brings us back to queuine.

More research is needed on all aspects of the so-called longevity vitamin, but one thing scientists do know for sure: we all have a dedicated enzyme that inserts queuine into DNA sequences that promote the stability and function of colon cells, or colonocytes.

Colonocytes are now believed to be one of the main guardians of the gut—making the difference between balance (homeostasis) and dysbiosis (imbalance).

As stated in the November 2018 issues of Science, “The central role of colonic epithelial cells (colonocytes) in maintaining homeostasis by shaping the colonic microbiota to provide benefit is now beginning to be appreciated....colonocytes functions as a control switch of the gut microbiota, mediating a shift between homeostatic and dysbiotic communities.”

As of this month, scientists now know of just two bacteria - C. difficile and an STD (sexually transmitted disease) - that competes with your body for queuine… But how many more of the millions of organisms living inside your gut may also be cheating you out of this nutrient?

Additionally, we’ve only been examining how the presence and absorption of TWO nutrients play a key role in your health, and how if your microbiome is out of balance, your long term health is directly affected… Imagine how many more nutrients and enzymes exist that are essential for healing, health and longevity and are being depleted by a gut that is out of harmony?

This chart, created by the British Medical Journal, illustrates well, how important it is to restore your gut for optimal health. 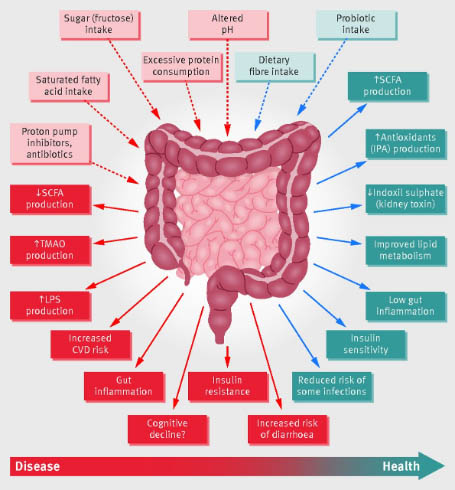 Diet will always play a key role in gut health. But, as in the case of choline, if the gut is out of balance, diet may not be enough.

Restoring your microbiome takes a combination of changes. Diet, yes, along with digestive enzymes, probiotics, and prebiotics to support your efforts.

In fact, just this week, George Washington University Medical Center published an index of the 165 (currently) microbes that are consistently found in “healthy” guts. This index is under intense review, but the intent is to provide a baseline of the organisms that should (or can) be present in a healthy microbiome.

Probiotics on this new healthy gut index include:

Other probiotics and prebiotics to consider include: