Type 2 diabetes [Diabetes mellitus Type 2] is considered by many a modern  epidemic. It’s also considered by some as an autoimmune disease.

In 2016, the World Health Organization (WHO) reported that the number of people with diabetes has quadrupled since 1980, with 422 million people diagnosed, globally. In fact, they list diabetes as the #1 cause of death, worldwide.

Sadly these numbers are projected to continue to grow, with a global estimate of 642 million people affected by 2040.

In the US, according to a 2017 report from the Centers for Disease Control and Prevention (CDC), there are over 30 million Americans living with Type 2 diabetes. They also reported 84.1 million people in the United States are pre-diabetic; having the precursors to develop this type of diabetes fully, unless changes in diet and lifestyle are made.

That’s 34% of the population on the borderline of getting diabetes.

Furthermore, the CDC estimates 7.2 million Americans are undiagnosed -- walking around as Type 2, and unaware of that fact. Of even more concern, the International Diabetes Federation estimates that worldwide, 212 million people with diabetes are undiagnosed.

A Leading Cause of Death in the US and Worldwide

With statistics like that, it’s no wonder type 2 diabetes is such a cause for concern. In 2016, the WHO reported that 1.5 people around the world died as a direct result of diabetes. Type 2 diabetes makes up between 90-95% of all cases of diabetes, meaning that of those 1.5 million, between 1.35 and 1.42 million people died as a result of this modern scourge. In the United States, it’s not much better -- Type 2 diabetes is currently the 7th leading cause of death.

With so many people on the brink with pre-diabetes, and an alarming number undiagnosed, the math predicts those numbers will continue rising around the world.

What makes this subtle disease so dangerous? Just that—it’s a silent, subtle condition, and sometimes the lack of symptoms can mean people live undiagnosed for years, while their high blood sugar levels damage their bodies from within. This damage can indeed be severe.

Just like all other forms of this disease, Type 2 diabetes centers around insulin—the hormone that assists our cells in receiving (using) the sugars from foods we eat—in turn fueling our bodies. If our cells are unable to utilize insulin efficiently, or the body does not have enough, blood sugar levels rise.

While someone with Type 1 is normally born with their body not making enough insulin to keep blood sugars in check, Type 2 diabetics develop increasing resistance to how their bodies use insulin. This requires the pancreas to work harder to pump out insulin, which in turn is not effective. Eventually, the overworked pancreas is no longer able to supply enough insulin to try to balance out the high blood sugars, so their levels rise and stay in dangerous, damaging ranges.

Dangers and Complications of Being a Type 2 Diabetic

Being a Type 2 Diabetic, and even being prediabetic comes with many significant risks to one’s health. As the CDC states in a 2018 report on their research and advocacy for diabetes, “A person with prediabetes is at high risk of Type 2 diabetes, heart disease, and stroke. A person with diabetes is at high risk of heart disease, stroke, and other serious complications, such as kidney failure, blindness, and amputation of a toe, foot, or leg.”

In fact, there is a long list of known complications and risks of having unmanaged or uncontrolled Type 2 diabetes. These include:

Dementia and Alzheimer’s -  A 2015 study published in the Journal of Clinical Investigation reported that there is a possible connection between Alzheimer’s and Type 2 diabetes, citing their observations of, “an increased risk for developing dementia, specifically dementia due to Alzheimer’s disease (AD). More studies have concluded similar connections and risks, but research continues.

Higher risk of CVD (Cardiovascular Disease) - According to the American Heart Association, those with diabetes have a 2-4% higher chance to die from heart disease. In fact, they consider diabetes one of seven significant, controllable risk factors for CVD.

Perhaps more worryingly,  of the diabetics 65 or older, 16% die of stroke and 68% die from heart disease.

Inflammation  - Inflammation in medical and research circles is spoken about more and more as the “foundation” of disease. The University of California, Berkeley, in particular, has taken a shine to researching the topic of inflammation, stating, “Inflammation is a complex immune-system response that may play a role in a host of health problems, including arthritis, asthma, heart disease, diabetes, and possibly even cancer.”

There is debate about whether Type 2 creates inflammation, or is (at least in part) caused by it. Regardless, those with Type 2 diabetes often have higher levels of inflammatory chemicals known as cytokines.

Neuropathy - This condition leads to amputations in diabetics; as blood sugars damage nerves and blood vessels, patients can lose feeling in their extremities. The feet, in particular, are vulnerable, with a simple, undetected cut or sore sometimes leading to infection so severe that the only recourse is amputation.

Even less extreme effects of neuropathy can still lead to chronic health problems for Type 2 diabetics, including mild to severe pain, urinary tract and digestive problems, erectile dysfunction (ED), as well as compromising blood vessels and the heart.

In terms of outward symptoms, neuropathy can be mild, with simple numbness, to very painful and even debilitating.

Other conditions or complications of Type 2 diabetes include gastroparesis, chronic periodontitis, retinopathy, hypertension, weight gain, high cholesterol, and even anxiety and depression.

There are several factors that are commonly attributed to a person developing Type 2 diabetes. These include: 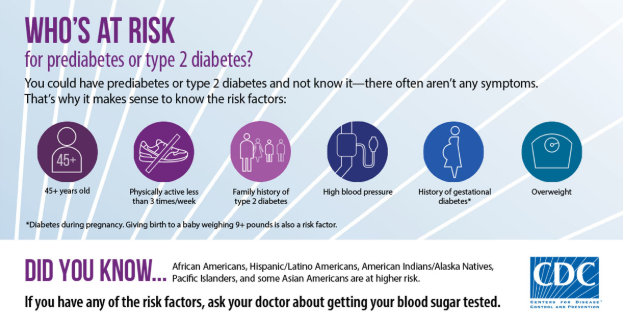 Things You Can Do to Prevent, Reverse, or Manage Type 2 Diabetes

While you can’t control your age, race, or family history, there is a lot a person can do to prevent or manage Type 2 diabetes.

According to the Joslin Diabetes Center, gaining control over your diabetes, “significantly reduces the risk of developing complications and prevents complications from getting worse.”

The WHO echoes this saying, “A large proportion of diabetes and its complications can be prevented by a healthy diet, regular physical activity, maintaining a normal body weight, and avoiding tobacco use.”

As with any serious health condition, working with a qualified healthcare professional is recommended. For ways to help manage or even prevent Type 2 diabetes, experts suggest the following:

In addition, there are natural supplements that researchers have found to have significant benefits for those living with or wanting to prevent this disease.

Magnesium - This mineral has been observed to lower the risk of cardiovascular complications due to Type 2 diabetes. It’s also been seen to lower the incidence of diabetes itself, as well as positively affect insulin resistance and blood sugar levels.

Vitamin D - In light of the above, one of the most significant benefits of Vitamin D on Type 2 diabetes is that it increases the body’s ability to absorb and use magnesium. In addition, studies show that Vitamin D is also beneficial in increasing insulin sensitivity, aiding neuropathy, plus decreasing both retinopathy and cholesterol.

A 2016 study showed that deficiency in Vitamin D was associated with higher incidences of PAD (peripheral arterial disease) in patients over 65. Similarly, a 2015 research team reported Vitamin D efficiency was prevalent in Type 2 diabetics with “macrovascular (including myocardial infarction and stroke) and microvascular (retinopathy, nephropathy, neuropathy, and amputation) disease.” Vitamin D has also been observed as a significant factor in decreasing inflammation associated with Type 2.

Cinnamon - This well-known spice is becoming more popular as a support for TD2. Not only does it increase insulin sensitivity, it has also been shown to reduce blood pressure. In fact, a 2008 study on rats demonstrated that an extract of cinnamon (cinnamaldehyde) when combined with another Type 2 supplement, berberine, had “greater anti-diabetic efficacy than Metformin.”

Ginger - Another ancient spice that has been studied for its benefits for Type 2 patients is ginger. A 2006 study supports other work demonstrating ginger lowers insulin resistance, observing its power to lower blood sugar levels without risk of hypoglycemia (low blood sugar).

More recent studies have underlined ginger’s ability to improve insulin sensitivity, and serve as “an effective treatment for prevention of diabetes complications.” As Chinese physicians have known for centuries, ginger is also considered to have powerful antioxidant properties.

Ginger is actually related to turmeric, which is well-known to quash inflammation and oxidative stress.Scientists have observed even more powerful results with a combination of ginger and turmeric, fighting against the kind of inflammation that leads to and can support Type 2 diabetes.

Vitamin C - In 2015, a study on humans showed how Vitamin C supplementation “could induce significant anti-inflammatory effects” in Type 2 diabetics. This is supported by a similar study on 64 patients from 2014, which also observed an improvement in fasting glucose levels and triglyceride levels.

One particularly exciting study published in 2016 underlined the positive effects of Vitamin C on insulin resistance, as well as showing notable benefits on oxidative stress in Type 2 patients. Even better, a study published the year before demonstrated a marked decrease in incidences of Type 2 diabetes in those with higher intakes of Vitamin C.

Other supplements that can support people wanting to manage or prevent Type 2 diabetes include berberine, Vitamin K, probiotics, omega-3, and chlorella.

Due to the fact this insidious disease is increasingly seen as an autoimmune disease, anyone wanting relief and to avoid it should consider ways to reduce inflammation and detoxify their body.

You want to ensure your liver, kidneys and lymphatic system are all working in harmony, and clearing out waste and toxins. Keeping these complex systems working at optimal levels includes ridding your body of nasty parasites (whose job is to hide from you; they don’t want you to know they are there)... As well as cleaning out and restoring your gut.

You want a comprehensive protocol to get your body into balance… When in balance, your body can heal.

If you want to detox, restore your body, and break the chains of inflammation that are the foundation of Type 2 diabetes and so many other conditions…

Get the All-Natural Tools You Need to BREAK the Chains of Autoimmune Disorders and Chronic Disease...Buy 1 get 3 for a limited time!